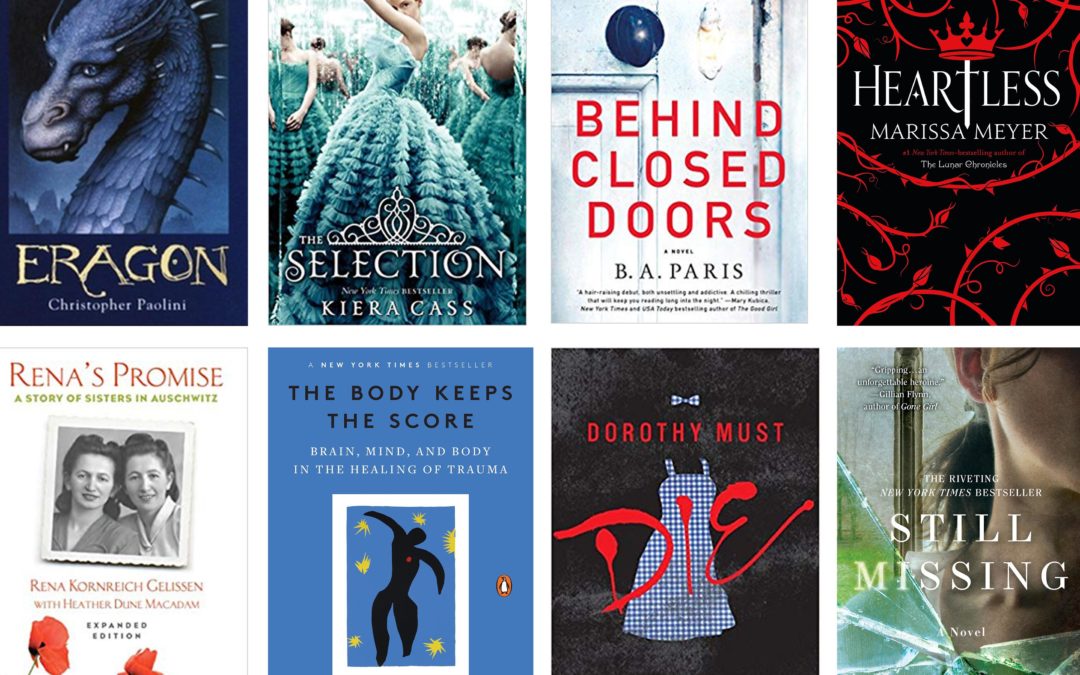 I have been an avid reader, as far as I can remember. My mom used to leave books in my crib, because I had severe insomnia as a kid and rarely slept a full night. I practically lived in the library as a kid, checking out 8-10 books a week. In school, teachers were always after me for reading in class.

I always lean on reading for an escape. I’m not a fan of deep books or challenging books, unless it’s in specific subjects. Sometimes life is just….sometimes you just need to get away, know what I mean? So here are some of my favorite books, the ones that are my friends, tried and true.

Ella Enchanted – Man, I LOVED THIS BOOK when I was a kid. DON’T WATCH THE MOVIE. It is nothing like the book and is instead a disgusting attempt at replicating what should be left alone.

His Dark Materials: To say I am excited about HBO picking this up, would be an understatement. This whole trilogy changed my life. I joke that I am a recovering Catholic, but really, what is religion but a drug? Phillip Pullman wrote His Dark Materials and tackles the false narrative that “the church” i.e. The Catholic Church, sells to its people. It’s why angry Christians fought against the original movie that came out, with Nichole Kidman in it.

Anyway, the books are beautiful! Well written, imaginative and such inventive concepts like having souls out of your body, called Daemons. I would love to think I would have a snow leopard as a daemon, but I would probably have a Chihuahua puppy….

Harry Potter: I mean, duh. You know this had to be on the list! Little known fact about me: I was *obsessed* with Harry Potter in high school. I don’t mean obsessed, like I really loved it and read the books a couple times. I mean, I had a binder, filled with theories, clues and observations, all in attempt to decipher what J.K. Rowling would come up with next. I was completely entirely wrong. I even focused on the color green, since it’s a popular color in her books, trying to decide whether or not the color had ties to how Voldemort would be defeated. LOL

The Inheritance Cycle: If you’ve never read the Inheritance Cycle, you’re missing out on something pretty amazing. I honestly think it competes with Harry Potter, on the scale of character development, world building and storyline. It’s all about dragons, elves, warlocks, dwarves, etc. Basically if Harry Potter had a baby with Lord of the Rings. LMAO

I got to meet Christopher Paolini this past spring and it was such an honor. He signed my old copy of Eragon and was so funny. Way funnier than I thought he would be. Every time I start writing, I think of how Christopher wrote Eragon when he was sixteen…and feel really shitty about myself. hah!

Behind Closed Doors: holy mother lovin’ duck wrestling, this book was SO GOOD. I just read it in Mexico and it immediately climbed to my favorites list. I cannot tell you how many times I gasped in shock. It was well written and a perfect suspense thriller. I’d love to see it turned into a movie!!! I can’t write much, because I don’t want to ruin it, but let’s just say…it’s the perfect depiciton of a narcissistic psychopath.

Only Ever Yours: I’ve read this book four or five times and cannot recommend it enough. It’s a dystopian novel, about when women start only being able to birth sons, so they have to genetically engineer women called Eves. The Eves are brought up to be utterly perfect and either become Wives, Concubines or Chasity. I just love how things are built in this story, the character development and what life would be like if men could control every facet of women’s lives.

The Selection: I LOVE THIS SERIES! I have been a huge fan of The Bachelor and that’s exactly what this book series is. It’s a dystopian series (I love Dystopias, can you tell?) where the nation collapses and in it’s place, a monarchy and caste system is developed. The princesses are sold, per the usual, but princes are put through a process called The Selection, where they choose their future wife on TV, where the nation watches. It’s a super fun series, nothing too serious.

Still Missing Actually, I love ALL of Chevy Steven’s novels but this was my introduction. It’s about a woman who is kidnapped and kept hostage for a long time. But it also focuses on the aftermath, which isn’t as largely discussed in mainstream media. Often, I find myself wondering after movies and books. What happens after the characters get what they wanted? Or didn’t want?

Dorothy Must Die: I’m not gonna lie, I love reinventions of the wheel i.e. twists on fairy tales. This one is about a girl that goes back to Oz, only to find out Dorothy has turned into a maniacal lunatic hell bent on destroying Oz.

Heartless: I LOVED THIS BOOK. It was a prequel for the Red Queen in Alice and Wonderland. It was beautifully written and heart wrenching. Marissa Meyer also wrote the fantasy/fairy tale series

Rena’s Promise I don’t do a lot of (auto)biographies, but books concerning the holocaust are different for me. This one took my breathe away. It even has pictures in it! It’s about a woman who is one of the first people to end up in Auschwitz and was there until the liberation. Her sister ended up arriving and it became’s Rena’s sole mission to keep her sister alive.

It’s harrowing and a serious testament to the human spirit. It’s dark…but totally worth the read.

The Body Keeps the Score: As someone who endured serious long term abuse, with C-PTSD, depression and anxiety issues, as well as a diagnosis of BPD that is passing…this book was super validating. It explores how trauma affects the brain and the body. It took me over a month to finish, because I could only digest 3-4 pages at a time. This is common. I also did have some triggering moments. It would definitely be more if you haven’t done over a year of intensive therapy like I had. So tread carefully, but hands down, one of the most helpful books I’ve ever read.

So there we go, some of my favorites to read! Do you love any of these books? Tell me in the comments!