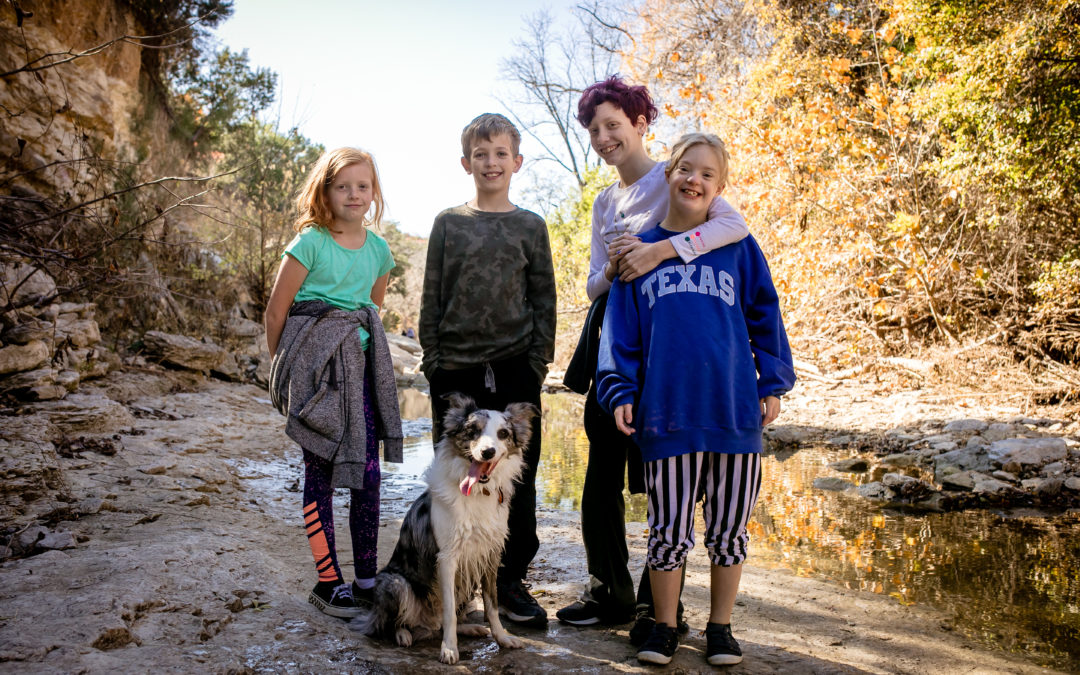 At the beginning of 2019, I lived a completely different life from what I do now. In January, I lived with my now-ex, we had four cats and two dogs, I lived in a big home with a backyard and more often than not, I got hours and hours totally alone. It was lovely.

In January, I also went on a date with Josh. You can read all about that here, but I want to take a moment to talk about his kids. You see, I’m essentially a step-parent now. I say essentially, because I’m not sure if society requires marriage in order to be considered a step-anything. All I know is that I do a lot of the pick ups, drop offs, doctor appts, dinners, activities, reading with them at night, giving sage advice they may or may not need. I cuddle them, I give them meds, I buy them clothes, I tell them how much I love them.

And if you had told me last Jan this is where my life would be, I would have laughed at you. And possibly run in the other direction. LOL

Having kids in my life has been incredible—y difficult. And incredibly rewarding. A part of me is still fighting against the rapid change. I never thought I would have kids in my life. I certainly never want to birth anything. Now? Now I’m in love with four little ginger gremlins that give the best hugs.

First, there is Alayna. She is the oldest and the twin sister to Riley. Since Riley has downs syndrome, Alayna picks up the mantle of typical  first born and therefore, bears most of the burden an eldest would naturally accept. She is a weird little chicken squirrel bear and revels in her weirdness. She’s more confident than some forty-year-olds I know, sharp as a whip and usually dances/squawks  while trying to communicate something. She also knows how to throw a mean glare and call you out on bullshit. She tries so hard and just owns who she is, something I greatly admire.

Then there is Riley. I never had a lot of experience with special needs kiddos until this moment of my life. I was so intimidated at first, if I’m being honest. She has a lot of communication issues and it’s taken me a minute to become fluent in Riley speak. But she shines with a joy that eases the intimidation. She loves hugs, she loves it when I read to her, she loves oinking like a piggy. She just loves. Unless it is something she doesn’t want to do. LOL Then she can be quite stubborn. She’s also obsessed with paper, fiending for the smooth white manna like a crack addict. We have to literally hide it, so she doesn’t go and destroy it. She cracks me up, coming into the bedroom after seeing fresh paper she can’t have. She once asked me a dozen times for it, coming in and out of the room, practically slapped her veins for it. She’s such a damn ham and I love her for it.

Then there is Logan. He is so eager to please, even volunteering to clean baseboards just for praise. He’s relatively reserved, but loves cuddling when he’s in the right mood. His love language is quality time and LOVES it when we sit and talk for hours. He likes to call me “Gee-enna,” in the most Southern voice you can imagine. He’s such a sensitive little soul, calling anything he doesn’t like “bullying.” hah! I keep having to try and explain what is actual bullying. His sweetness is his strength and his weakness…I just hope the world isn’t too cruel for him. He loves nachos and I’ve been spending time teaching him how to cook. It makes him super happy, which is always the goal! I’ve also started him in Jiu Jitsu, which he has thorough enjoyed thus far.

Finally, we have Cami. A freckled red head with a diabolical cackle to match. I’m actually a bit concerned about how she will be as a teenager. She will either be a gang leader in prison or the president. Lord only knows where her destiny is headed. She is also nicknamed “Red Panda,” and loves to crawl around like a little kitty cat. She grew to trust me, mainly because whenever she wants to act like a kitten, I humor her and praise her like a sweet kitten. She also goes through phases where she needs to be held like a baby and rocked like a baby. I could go all psychology on it but I won’t. She loves to cuddle…one of my favorite moments with her thus far is cuddling in bed with her on a Sunday morning and watching The Emperor’s New Groove. I’m glad I met her at this age, she’s so intimidating and precocious and wonderful, all at once.

I love these kids. So much. I never understood when people said, “they’re so exhausting and yet, so rewarding.” I kept wondering how something that takes away your naps could be rewarding…but I get it now. I crave time with them, I want to make them happy, I want to help them become good little humans.

I’m looking forward to spending more time with them and get to know them better. And watch them grow into good adults!